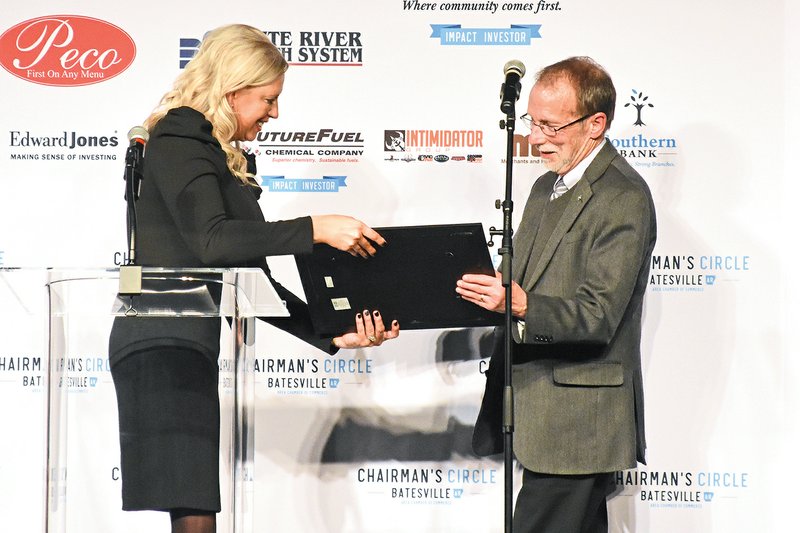 Cedar Ridge Elementary is a Leader in Education award winner! They were recently awarded the Leader in Education award by Crystal Johnson, CEO and chamber president of the Batesville Area Chamber of Commerce. Johnson herself has her own set of awards, including being one of Arkansas’ 250 Most Influential Leaders by Forward Arkansas and is on AY Magazine’s list of Intriguing Women for 2019. Johnson has recognized the 2019 Leadership Batesville class, commenting that “the program was designed to educate and prepare individuals for leadership roles in the community. It also allows the 16 participants a behind-the-scenes look to see what is going on in the area, but the class does have strict attendance requirements.”

Of the five major awards she presented, the Leader in Education award was presented to Cedar Ridge Elementary and accepted by Slayton Ashley (third grade) and AZ Ashley (fourth grade), both children of Superintendent Andy Ashley; Addison Owns (fifth grade), daughter of Tracey Owens, the curriculum director; Ian Craig (fifth grade), son of assistant principal Shawn Craig. Ian Craig said the recognition from the chamber strengthens the school’s belief that students have the potential to become successful leaders. “Man, is it a great day to be a Timberwolf,” Shawn Craig said. “We started two years ago. [Cedar Ridge was] a low-D school, and now we’re two-tenths of a point from being a B, but we’re not gonna stop there — we are going straight to that A-plus.”

The process focuses on The 7 Habits of Highly Effective People, and as Wiley Osborn put it, “These are habits we as employers look for, and this is our future workforce.”

“Leader in Me is not just a program; it is a process. We believe in the whole-child concept. We believe that every student … has the potential to become a leader,” said Slayton Ashley to the audience. Sister AZ Ashley added in, “We also learn to listen to other people’s ideas and feelings, work as a team, take care of our bodies, spend time with family and friends, and find meaningful ways to help other people.” According to Addison Owens, some of her own habits include “being a responsible person, planning ahead and setting goals.”