Skyline Elementary is not the same school it was four years ago. The building is the same, but the school culture has been transformed to one of empowerment and leadership.

Principal Chuck Vilardi said that the transformation of his school, students, and staff has come as they have implemented The Leader in Me process. 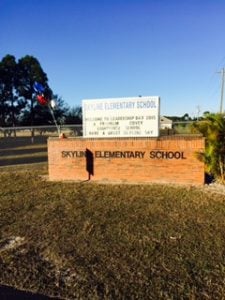 “It’s been the best transformation of a school I’ve seen in 22 years of education, because it involves everybody,” he said. “It involves the adults, the kids, the parents, and the community. The kids are using the vocabulary, they understand it, and it’s just a different world when they talk to you. Now they actually have a focus and a direction, whereas four years ago they couldn’t really talk about their data and their goals, and they weren’t as driven as they are now.”

Vilardi learned of The Leader in Me process from a fellow educator in Charlotte County, Florida. He read The Leader in Me and then bought books for all of his teachers and led them through the book study.

“Once we were done, we sat down and said, ‘Is this something we want to do?’ Everybody said, ‘We want to do this, but we want you to commit that you are going to spend the money and that we’re not going to stop the training in the middle of it.’ I made that commitment with the staff and it’s taken off from there,” Vilardi said.

Colleen McCarthy, a resource teacher at Skyline Elementary, explained why she and the other teachers wanted to have Vilardi commit to the training.

“When we, as teachers, realized that The Leader in Me is not a program, that it’s a philosophy, it’s a way of life, we knew that if we were going to do this, then we were going to do it the official way,” McCarthy said. “We wanted to make sure that we were supported.”

The support and continued training the teachers and staff receive helps them apply the 7 Habits in their personal lives and in their specific responsibilities at school.

Nancy Afflerbach, a school counselor at Skyline, uses the 7 Habits in group counseling sessions. She said the 7 Habits have helped students identify their emotions and set behavioral and academic goals.

“We’re finding that we need to do a lot with regard to the social/emotional aspect of the children,” she said. “A lot of them have very dysfunctional families, so we have become the role models and people to whom they look up. Being able to promote the habits not only changes our mindset, but also the children’s mindset.”

The new culture of the school is one in which students feel comfortable sharing their ideas and taking ownership of their learning. Jhonathan Taveras, the technology specialist at Skyline, shared an example from when the students made a video about their school’s Read Across America Day.

“It started as a five-minute thing, where the students were going to record a few people reading to kids, and it progressed to where students went throughout the whole school doing videos of anything they saw,” he said. “The students took so much ownership over this project. They said, ‘We want this to be good because we’re attached to it.’ They began to apply all of the habits in this situation. Some of the kids that you don’t even see or hear on the video were working behind the camera or coming up with angles.”

Taveras explained why this culture of ownership and empowerment is important for students.

The school culture transformation has helped Melinda Nelson, a reading specialist, and other staff members see every student as a leader.

“In our Veteran’s Day program, we sent out a statement for students to write a speech they would like to give. I handed the speeches to Mr. Vilardi without the students’ names on them,” Nelson explained. “We might never have selected the students he picked in the way we did things before. But through The Leader in Me, it’s given us a new approach, and we discovered students we never thought could be leaders.”

McCarthy said that the new paradigm of The Leader in Me has specifically helped the students in her special-needs and resource classes.

“The Leader in Me has really allowed me to be more of an advocate for my students. Sometimes we may have looked toward the gifted children and the ones who stood out—who were natural speakers and natural shining stars. But The Leader in Me process has allowed me to say to all the children that everyone has the potential within to be a leader,” McCarthy said. “Other students are starting to realize that we can all be leaders. The Leader in Me really allows a lot of our children with special needs to be able to shine through and seek out the potential leader within.”

Whether it is in counseling, reading, special education, or technology class, Vilardi says The Leader in Me has completely changed the culture of Skyline Elementary.

“As a principal, it really is a gift to me and to the students at the school, because it’s actually empowered people to do more—especially for the kids,” he said. “It’s empowered students to have a ‘voice’ in their school. I can honestly say that the campus has turned into a campus the students are very, very proud of and proud to be part of. I think The Leader in Me is a gift all kids around the world should have.”