For two hours, there was a look of serious contemplation on the face of my five-year-old son. The expression first appeared after we met a young blind woman and her seeing-eye dog at the store. We had exchanged personal introductions, and she explained the roles and relationship she and her dog shared. 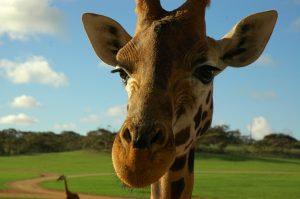 Since that encounter, the look of serious contemplation had not left my son’s face. When my young son finally broke his silence, he shared an insightful perspective on the young woman’s situation.

“Daddy, you know the lady with the dog that helps her see? I think she should have a giraffe instead, because giraffes’ necks are longer, so they can see farther than a dog. A giraffe could see over the heads of all the people, and the blind lady wouldn’t get stuck in a long line waiting to pay.”

Now, his face exuded great pride. Two hours of childlike reasoning had brought my son to conclude that when one needs to see farther ahead to achieve a better result, the elevated vision of a long-necked giraffe is better than the shortsighted, step-by-step guidance of a dog.

Without a degree in social science or a single day of business experience, my son had discovered the simple yet fundamental value of visionary leadership. Raising one’s gaze to see a better future and maintaining an elevated perspective will produce greater results than guiding people along one step at a time.

My curiosity was piqued by my son’s insight into the value of visionary leadership. I wondered if other connections could be made between giraffes and leadership. What I discovered in my research about the majestic giraffe was indeed relevant to the principles and qualities of a truly visionary leader.

Visionary Leaders Have an Elevated Perspective

Giraffes are the tallest animals on earth (between 13 and 18 feet tall). Their obvious vertical advantage gives these gentle giants a broad view of their surroundings. Other animals, such as zebras, antelope, and wildebeests, often congregate near giraffes to take advantage of their ability to see and move toward food and away from predators.

While not all human leaders are tall in stature, those individuals who possess the quality of visionary thinking and the ability to take action on their vision are to any organization what the giraffe is to the animal kingdom. People are often drawn to those who they know can identify opportunities, see dangers in advance and, in turn, take action accordingly.

Deep in a giraffe’s neck, a series of valves regulate the flow of blood to the head. Without these valves, blood pressure and gravity would cause a head rush and potential collapse when the giraffe bent down. The internal regulators of a giraffe’s circulatory system keep its body from succumbing to the physical pressures that could easily bring it down.

Visionary leaders must also have a kind of internal regulation system to manage the various pressures they face. Pressures such as meeting new standards, overcommitting, setting unrealistic goals, having personal expectations of perfection, and mismanaging time can bring the strongest leaders down. To avoid collapsing under these pressures, a leader must learn to manage internal and external pressures while maintaining an elevated perspective.

Mature giraffes can deliver a well-placed kick that will end an attempted takedown by a predator. Frequently, giraffes also rush to protect other vulnerable animals from a predator’s aggression. Better yet, a giraffe’s clear, elevated vision also helps in protection because it can identify and avoid dangers long before they become disasters.

Likewise, visionary leaders are adept at seeing danger and protecting themselves and others. They are proactive in resolving issues before they become detrimental to the organization, group, or community. And when unexpected dangers do arise, visionary leaders do not hesitate to take effective action.

As I think about the many leaders with whom I have met and coached over the years, I think of how most could benefit from at least one aspect of “giraffe-like” leadership. With a clear vision, an internal system to manage pressure, and the ability to protect both themselves and others, these individuals would rise to be more effective in their life and leadership responsibilities.

What aspect of giraffe-like leadership can you apply in your life or in your school?