Alex, a special-education student with oppositional defiant behavior, transferred to Crestwood Elementary during his Grade 5 year. His father told school administrators Alex would probably be in trouble “24/7,” as he had been at his previous schools.

Initially, the father’s prediction was accurate. Alex was involved in several fights, and he displayed inappropriate and disrespectful behaviors, which led to time-outs, parent conferences, specialist meetings and, eventually, suspensions. 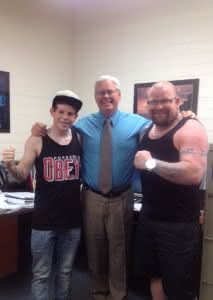 But then something changed in Alex. As he learned and internalized the 7 Habits taught in The Leader in Me process at Crestwood, his behavior improved substantially. He learned to apply the principles behind Habit 1: Be Proactive, which is taught to students as “You’re in charge. You are a responsible person. Take initiative; choose your actions, attitudes, and moods; and do not blame others for your actions or their actions.” Alex learned to manage his behavior in a way he had never done before because of this habit.

A few months later, Alex’s father shared with parents who were new to the school how much his son had changed.

“I just want all you parents to know that this is the best school anywhere,” he said. “It has changed my boy’s life, and it’s helping our family because Alex is teaching us the 7 Habits. Alex is my hero.”

Alex had taken home the lessons of being responsible for his own behavior, setting goals, and working toward those goals. He became a leader and shared with his family, through his powerful example, the benefits of ‘being proactive.’

At the beginning of the next year, Alex’s father followed his son’s example and made changes in his life. He requested a meeting with his family and the principal where confessed that he was wanted in Washington state in the United States for serious drug charges and felt he needed to turn himself in to the proper authorities to take responsibility for his behavior.

He contacted the Calgary Royal Canadian Mounted Police and made arrangements to turn himself in, anticipating being extradited to the United States for trial. Because he had been an involved parent and had been employed the entire time that Alex was at Crestwood, several people at the school, including the principal, offered to provide letters of reference as a support.

When the judge read the letters and saw what Alex’s dad had been doing with his life in recent years, he instructed the lawyers to arrange a settlement, because he would not try the case. “This man,” the judge said, “is reformed.” Alex’s father was released from jail and returned to his family.

Now Alex and his father are both reaping the benefits of Habit 1: Be Proactive.

Tags: be proactive, leadership, spotlights, student empowerment, The Leader in Me