Karen Soper, principal of Manti Elementary in Utah, recounts trying to figure out how to best help a fifth grader who was transferred to her school. This was no ordinary fifth grader.

When David* arrived at his new school, he had lost a year of school for a violation that led to a year’s suspension. 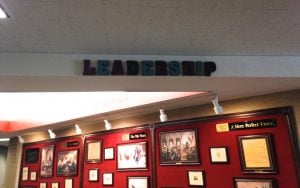 “I had never dealt with a situation like this,” said Soper. “I knew I wanted to help him get on the right track, and it wasn’t going to be easy.”

Just three months into the school year, David shows up early on Monday morning before school starts. He is not forced to do this as part of a remedial or behavior-management program. He comes to school early because he doesn’t want to miss the morning announcement.

Why? The morning announcement can’t happen without him, as he is responsible for planning, preparing, and conducting the announcement to the student body. On Mondays, David dresses differently, his hair is combed, he has a positive demeanor, and he stands tall.

David was entrusted by Principal Soper to play a very important role at school. By applying to become the “Leader of Morning Announcements,” David was given an opportunity to succeed at something “cool” and important to him. He had heard other kids at school do the announcements, and now it was his turn.

Since adopting The Leader in Me, Manti Elementary has provided classroom and schoolwide leadership roles for students to engage in fun and meaningful ways that contribute toward running the school. Many kids do their leadership roles in pairs or in teams.

“Kids want to feel like they matter—like they can do something important. When David got his leadership role, I started to see a change in him,” Soper said. “He was focused. He wanted to be at school, even to the point of coming in early. I could see David’s confidence grow, and he was having a positive connection at school.”

The Leader in Me is all about empowering kids to become leaders and take ownership of their learning and school experience, which carries into other aspects of their success.

“David sees himself as a leader. And as a leader, he wants to be at school, be with friends, and make a difference. He isn’t the same boy who was suspended the year before. It’s a new beginning for him—David feels successful, which is something he hasn’t felt before,” Principal Soper said. “We’re all thrilled that he feels ‘at home’ at our school.”

*Name has been changed upon request.