What is The 7 Habits of Highly Effective People?

First published in 1989, The 7 Habits of Highly Effective People is considered one of the most influential, best-selling business and management books ever written, having sold over 25 million copies in 52 languages. According to Fortune, The 7 Habits is “one of the best-selling books of all time,” was named the “most influential book of the 20th century” by Chief Executive magazine, and was listed as “one of the top 10 most influential management books ever” by Forbes. For the last 25 years, the 7 Habits have guided generations of readers and have been successfully adopted and implemented by thousands of the world’s leading organizations in every country, including Fortune 100 and 500 organizations, governmental agencies, and educational institutions.

In The 7 Habits book, Covey writes that he conducted an in-depth study of decades of principles of personal, interpersonal, and organizational effectiveness, which he gleaned from numerous books, articles, and essays, written by some of the world’s greatest thinkers and leaders such as Aristotle, Benjamin Franklin, Samuel Johnson, George Bernard Shaw, Viktor Frankl, T.S. Eliot, Carl Rogers, and Peter Drucker. These principles include fairness, integrity, teamwork, honesty, human dignity, service or contribution, quality or excellence, potential, patience, nurturance, encouragement, responsibility, vision, collaboration, and renewal. Covey emphasized that these principles were not his own; rather, he synthesized and assembled them into a framework that was easy to understand and implement—The 7 Habits of Highly Effective People.

The principles taught in the 7 Habits are universal, timeless principles of personal, interpersonal and organizational effectiveness, which are secular in nature and common to all people and cultures. They transcend political, philosophical, religious, socioeconomic, generational, gender, and lifestyle differences, and may be adapted and applied in any context or environment.

In his foreword in the 25th anniversary edition of The 7 Habits book, Jim Collins, business thought leader and author of The New York Times best-seller Good to Great, said:

“There had been hundreds of years of accumulated wisdom about personal effectiveness…but it was never assembled into one coherent, user-friendly framework. Stephen Covey created a standard operating system —the “Windows®”—for personal effectiveness and he made it easy to use….The ideas embedded in the framework are timeless. They are principles. That is why they work, and why they speak to people in all age groups around the globe…. But, I think the most important aspect of the 7 Habits—what makes it not just practical, but profound—is its emphasis on building character rather than “attaining success.” There is no effectiveness without discipline and there is no discipline without character. …I have come to a personal belief…that great leadership begins first with character—that leadership is primarily a function of who you are, for this is the foundation for everything you do.”

The principles taught in The 7 Habits of Highly Effective People are outlined in the table below: 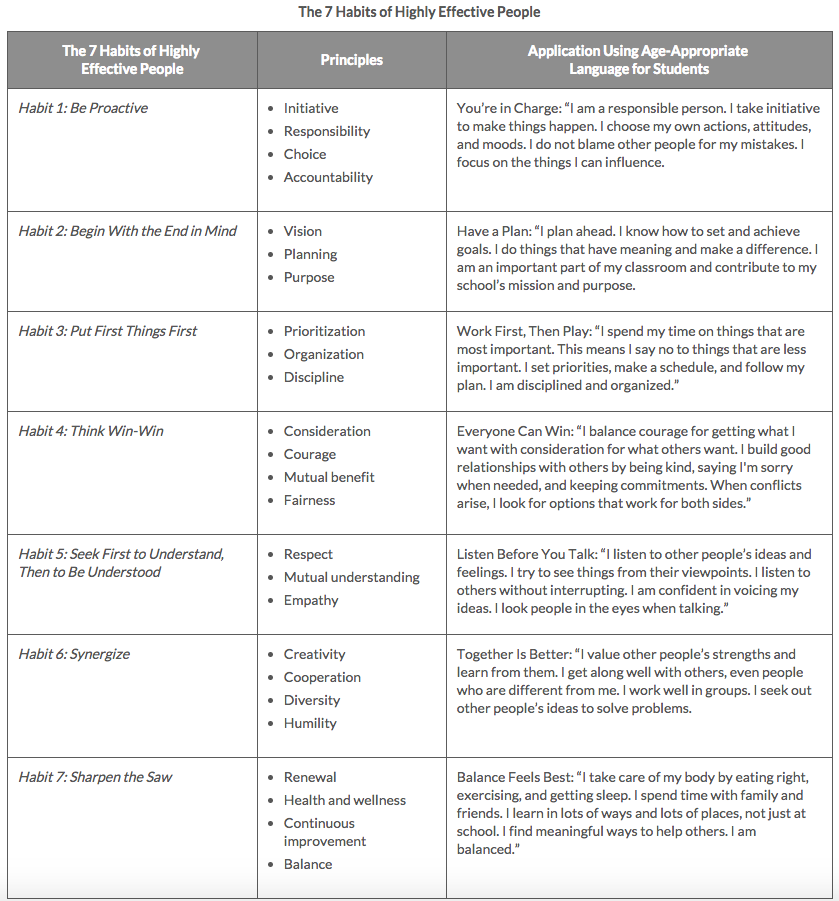